Amanda Adair is above the rest 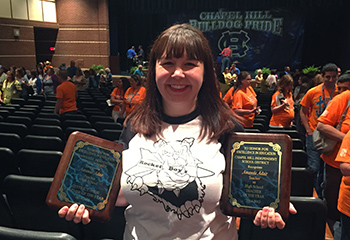 CHISD has named Amanda Adair as Teacher of the Year by Superintendent, Donni Cook, and Assistant Superintendent, Lisa McCreary today, June 8th.  The announcement was made at the district-wide final day of Teacher InService in the Terri Procell Bowen Auditorium among her peers and colleagues.  Adair was recognized as the campus Teacher of the Year due to a previous vote by her fellow teachers.  Other campuses chose Nicole Read (Wise Elementary), Valarie Longmire (Jackson Elementary), Bethany Chancellor (Kissam Elementary), and David Peacock (Chapel Hill Middle School) as their Teacher of the Year Candidates.  Adair spent the 2014-2015 school year teaching Physics and preparing her Rocketry students to launch at NASA, in Houston, on May 18th.  She also became the new UIL Coordinator, this year, where she planned and organized to get each UIL Coach ready with an academic team of students to compete against surrounding schools in events such as Debate, Computer Applications, Journalism, Accounting, Ready Writing, Number Sense, and Spelling which resulted in several students advancing to Regionals. Adair finishes her 3rd year at CHISD strong with her new prestigious title.